Opening with a haunting score delivered by Lesley Barber – all written in minor key – Kenneth Lonergan (Margaret, Gangs of New York) tells a gritty, real-world story of Lee Chandler (Casey Affleck), a man living in Boston as a maintenance worker with a burning sense of grief inside of him. Isolated with no indication of an active social life, he is forced to return to his hometown Manchester By The Sea, Massachusetts after the death of his brother, Joe (Kyle Chandler). It is here he learns he will now become the legal guardian of Joe’s son, Patrick (Lucas Hedges).

A fishing port with nothing but dark clouds and circling birds matches Affleck’s character — pained, unresponsive, worn down —as he tries to ride out his time with as little to say as possible. Avoiding social or deep, emotional situations as he tries to come to terms with the burden that rests on his shoulders, Lee shirks confronting his ex-wife Randi (Michelle Williams) and also the responsibility of learning to take care of Patrick.

Dotted throughout the film, a series of flashbacks offer insight into Lee’s self-imposed exile from his home town in Massachusetts. Affleck’s portrayal is at its most chilling when he tries to end his own suffering by attempting to kill himself, although is quickly stopped by his brother, Joe. His anguish and resentment also has a ripple effect on Patrick, who suffers from episodes of panic attacks, feeling completely alone and unable to cope with the death of his father. Numerous drunken bar brawls, another sign that his life is spiralling out of control, then leave Lee beaten and bloody, struggling to adjust to life in the sombre, spiritless town. 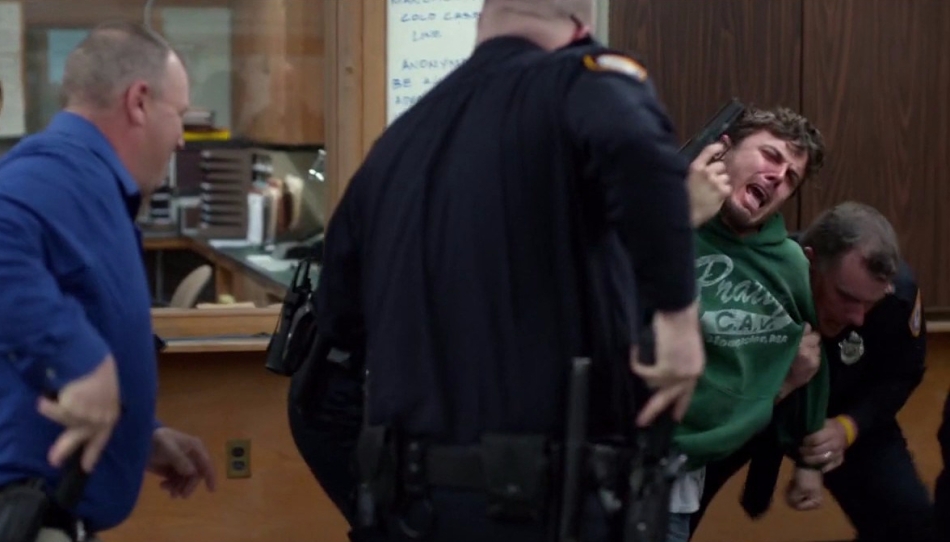 The success of the film lies in this portrayal — Lee is so far gone, so consumed by grief that he has become almost immune to the world around him, a man who has reached his limits. Affleck plays this part well, communicating emotions viscerally, painting a very real, lived-in picture of what life must be like for someone coming to terms with grief in a non-cliche, movie way.

That said, while the film may offer Lee little comfort — he is forced to stay in Manchester until Spring when the ice thaws to be able to bury his brother — Lonergan is keen to spotlight some hopeful and optimistic moments. The irony of Lee’s life being literally on ice may appear dark and twisted on the surface, but actually lightens the mood through a series of comedic scenes. It’s far from easy going, but through these moments, Lonergan seems to want to remind us that even in the most testing of times, there is always something to cling on to.

Manchester By The Sea didn’t necessarily solve any problems, nor did it end on a happy note, but it felt real. Lee ends up telling Patrick that he can’t look after him because he can’t shake his own demons; “I can’t beat it”, he says mournfully. It’s a heartbreaking end to an absorbing winter tale that holds up a magnifying glass up to some difficult issues. Manchester By The Sea isn’t about overcoming grief, it’s about acknowledging how to live with it.

1 comment on “Manchester By The Sea: Tragedy and Acceptance”